Hunting is a pastime that many individuals enjoy. Crossbows are becoming popular weapons to use while hunting, but unfortunately, not many people know which crossbows are the best to purchase. If you are interested in crossbow hunting, whether it is a small game or something a bit larger, the first thing you should do is become familiar with the weapon.

To start, there are two types of crossbows that may interest you. The first is a recurve bow, which features a simple design that is perfect for beginners. The other type of crossbow is a compound bow that uses a lot of pulleys and short strings to create more power when the arrow is released.

There are a lot of great crossbows on the market, and in this guide, we will explore ten of the best ones that are available for you. Before we dive into the reviews, let’s take a look at some of the features you should consider before making a purchase.

Now that you know what to look for in crossbows, let’s dive right into the reviews. 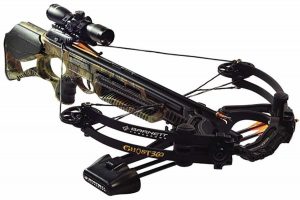 The Ghost is a compound device that utilizes carbon riser technology to reduce the weight of the unit by up to 43 percent, which means that the Ghost only weighs seven pounds. It has a draw weight of 165 pounds, so a cocking rope is the best way to set up your device.

In addition, the arrows fly at a speed of 360 feet per second, which makes it perfect for hunting elk, bear, or moose, but it is also a great option for the smaller game as well.

The next crossbow on our list is one that utilizes a frame that is designed with a thumbhole stock to ensure that you do not lose your grip as you aim. The device only weighs five and a half pounds, so it is a very well-balanced device. It has a draw weight of 200 pounds, but even so, it is an easy device to cock.

This unit comes with a Deadzone scope that offers, even more, accuracy, and the arrows fire at a steady rate of 305 feet per second. Since safety is always the priority when using a weapon, it is important to note that this crossbow does not have an anti-fire mechanism, so it may not be the best option for inexperienced crossbow hunters. 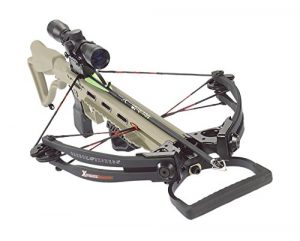 The Carbon Express X-Force is a device that is less than seven pounds because it is designed with a skeletal frame that is easier to balance, especially for those who are new to using crossbows. The compact device is merely 12.5 inches in length when it is cocked. It features a rifle-like stock that is perfect for hunting, and it shoots an arrow at 315 feet per second.

The unit has a draw weight of 165 pounds, and it features a Silentech coating to dampen the vibrations and keep your shots silent. In addition, this device is fog, water, and shock resistant, so it is perfect for hunting early in the morning or during a light rain.

The Wicked Ridge Invader is a compound crossbow that was designed perfectly for hunting both large and small game with ease. Weighing a little over six and a half pounds, this crossbow is easy to balance while you are taking aim as well as walking in the woods. The unit has an aluminum cutout covering that is designed to make it a lighter device that is just as powerful as the competition.

The draw weight is only 165 pounds, so using a rope cock will only require about 80 pounds of strength on your part. This process is made simple by the ACU-52 cocking mechanism featured on the crossbow. The three and a half pound trigger is capable of firing an arrow at 330 feet per second, which is enough power to easily stop a bear in its tracks. 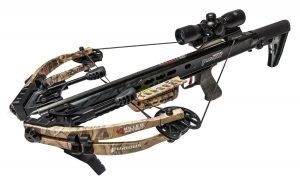 The Killer Instinct FURIOUS is a crossbow that is perfectly attuned for big game hunting. This device is a bit heavier than some of the crossbows on our list, weighing in at 7.2 pounds, but its compact and ergonomic design is part of what makes it so perfect for hunting. This compound bow is 17.5 inches long when it is not cocked, and it has a draw weight of 185 pounds.

This powerful weapon can shoot arrows at a speed of 370 feet per second, and it comes with a multi-reticle scope to help increase the accuracy of the device. In addition, the trigger on this crossbow features TriggerTech Friction Release Technology that fires with only two pounds of pressure, which is a great soft touch trigger that is perfect for a beginner. 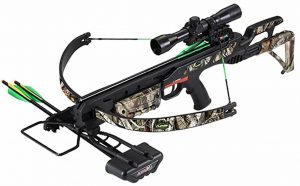 The Terminator is a crossbow that is lighter than the majority of the ones that we have featured on this list thus far, which is because this is a recurve bow instead of a compound one. The unit only weighs about four and a half pounds, which makes it easy to take aim and fire quickly. This feature is great for a beginner who may not be able to balance heavier weapons quickly.

The crossbow has a draw weight of 175 pounds, which means that it will not require much effort to cock it with a cocking rope. It does not have quite as much power as some of the compound crossbow options on this list, but it still has an impressive firing speed of 260 feet per second. 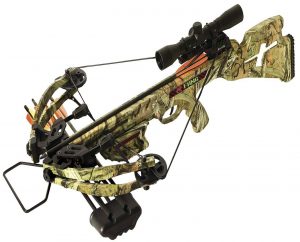 The Fang 350 Crossbow is a compound device that weighs in at just less than seven pounds. The trigger requires a solid four pounds of pressure to engage, which means that it is easy to use, even for beginners.

This device has a draw weight of 155 pounds, which is easy to handle, even with the cocking rope included in the packaging. Besides, this crossbow is a powerful weapon; in fact, it shoots at an incredible 350 feet per second. The Fang 350 is available in soft camouflage, or if you prefer, plain black is available as well. 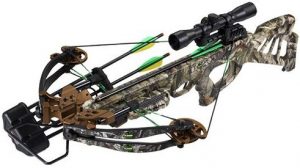 The Beowulf is a lightweight compound bow that is only six and a half pounds, which makes it the perfect weight for beginners or smaller statured individuals to hunt with. It features a camouflage design and an ergonomic design that is comfortable to shoot and simple to aim.

This device has a draw weight of 175 pounds, so it is not too difficult to cock. In addition, the Beowolf is able to shoot arrows at a speed of 360 feet per second without making excessive noise that will scare away your prey. 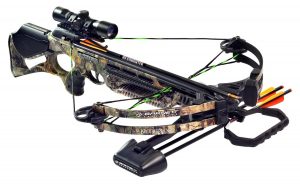 This device, which is the Outdoors Brotherhood Crossbow, comes in a package that is designed to be ready to shoot without much assembly and preparation time involved. Taking down a bear from a distance of 40 yards should not be an issue. The seven-pound weapon has a draw weight of 160 pounds, and this compound bow is capable of shooting an arrow at a speed of 350 feet per second, so aiming for the chest of a bear is likely to be deadly.

This device also utilizes an ADF trigger system that is designed to give you a shot without recoil by way of the 3.5-pound trigger. 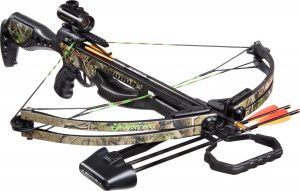 The first crossbow on our list is the Barnett Jackal Crossbow; a compound bow that has a draw weight of 150 pounds that is easy for a beginner to cock. It is a powerful weapon that is capable of shooting at speeds of up to 315 feet per second.

The device comes with a premium red dot scope as well as three 20-inch arrows. The crossbow itself only weighs 7.7 pounds, so it is lightweight and comfortable to use. In addition, a five-year warranty is included with the purchase.

Finding the perfect crossbows to fit your needs and hunting style can be a process. Don’t take this decision lightly because it could mean the difference in hitting your target or watching it walk away. The crossbows on our list are great options, but there are plenty more on the market that we have not discussed. If you have not found the perfect crossbow within this guide, continue your research until you find it. Happy hunting!

No votes so far! Be the first to rate this post.

This site uses Akismet to reduce spam. Learn how your comment data is processed.

As an Amazon Associate, we may earn an affiliate commission when you buy through qualifying links on our site.